Nathan Davis is a Melbourne born artist, illustrator, and avid swearer. He makes quite a few of the podcast covers, shirt designs, and other art bits of Sansparaphernalia. His work can also be found on nerdy shirts, and also a few pairs of underwear. He is currently in Chicago due to a promise of untold riches and/or magic beans.

Get in touch with Nathan: 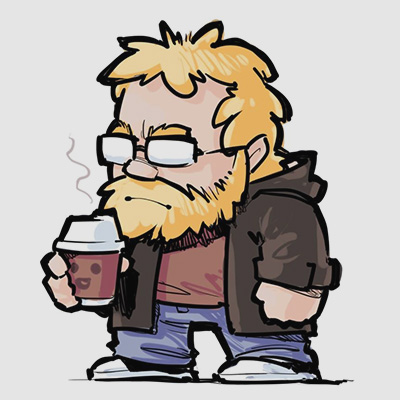 Nathan Davis makes art in the hope that its legacy might make people forget about that time he was on national TV with Dylan Lewis in tracksuit pants and a Wallace & Gromit t-shirt. Or that time he hosted an open mic, lost the list of people playing, and pulled names out of a hat to see who'd play and pissed off everyone who wanted to play at different times. Or that time he swung a baseball bat, and hit another grade 3 kid in the face, and it would've been a home run but the teacher called the game off because a kid had just been hit in the face with a baseball bat. Or that time he dropped his wallet in a wishing well fountain, and couldn't retrieve it because an incensed octogenarian was screaming at the top of her lungs that he was trying to steal from a cancer charity.