Steve Dawson is a writer, improviser and all-round nice chap. He produces and edits the Dear Harry/Spock podcast, techs the live show and co-hosts and produces his own improvised podcast, Mind Canyon. Steve makes all the music for Dear Harry/Spock, and used to produce music as part of the duo 'A Scholar and a Physician.' They have previously worked with Piney Gir and Chicks on Speed. His favourite film is 'Hudsuck Proxy' and his favourite meal is cake. 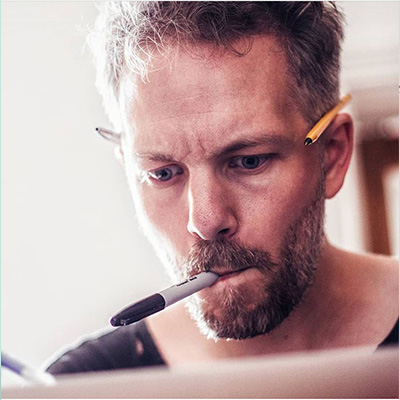 Steve Dawson is part of the Dawson Bros. writing team who have worked on a variety of narrative, sketch and entertainment shows. Notable credits include two series of hit BBC1 sitcom Big School, co-written with David Walliams, the multi-award-winning Ant & Dec's Saturday Night Takeaway, the Banff-nominated sketch show Dawson Bros. Funtime, the BAFTA-nominated The Peter Serafinowicz Show, the BAFTA-winning That Mitchell And Webb Look and The One Ronnie - their 'Blackberry Sketch' was the BBC's most-watched YouTube clip for more than three years. They've written Comic Relief sketches for Daniel Craig, Russell Brand, Kate Moss and many more. In 2014 they successfully sold a pilot script to Warner Bros. and NBC in the USA.